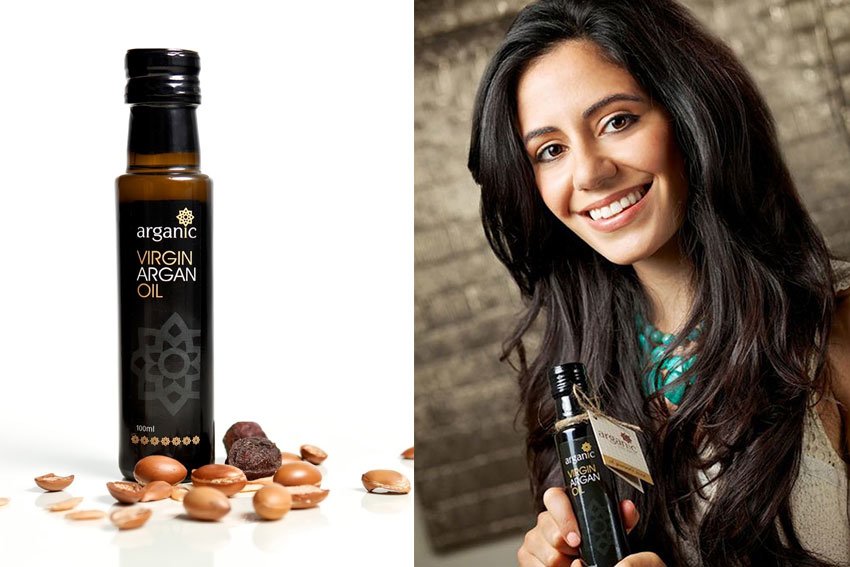 "Argan oil is the new olive oil" has been the common cry of the trend-driven food press lately but Dana Elemara, the face and brains behind Arganic oil, is not so sure.

"We love olive oil, too, but variety is the spice of life," says Elemara. "Argan oil has its own unique properties that work on a number of levels — health, beauty and gastronomic. There are many things that argan oil goes really well with but I still prefer olive oil on tomatoes."

Argan oil, which is made from cold pressing the acorn-like kernel of the bright yellow argan fruit, has been described as having a nutty and chocolatey depth of flavour. It's a sophisticated taste, adds Elemara, great for dunking walnut and date bread in or to enliven a range of exotic salads.

I love it on seared tuna with sesame seeds and ginger, and drizzled on porridge with dried fruit and nuts," she says. "In Morocco they drizzle it on cooked eggs with cumin and enjoy it on pancakes with honey. Some people take a spoonful a day as a health supplement, too, as it's high in vitamin E, has been proven to aid digestion, lower bad cholesterol and help regulate blood sugar."

I just hoped it tasted good... Once I tried it, I knew the show was on.

Elemara first heard about argan oil from a friend. She liked the fact that it was an ancient, "almost secret" ingredient rooted in the Berber culture and harvested sustainably on small-scale farms in south-west Morocco. "I just hoped it tasted good," she says. "Once I tried it, I knew the show was on."

Having spotted a gap in the market and quit her job as an analyst at Goldman Sachs, Elemara spent a lot of time laying the groundwork for the product launch and building relationships. Networking is second nature to her and she makes the most of Britain's buzzing food culture. "At Goldman it was instilled into us to think about how can you help others before they can help you."

In just three years Arganic has forged some fruitful partnerships. Its oil is on the menus of some of London's leading restaurants, including The Modern Pantry, The Dock Kitchen and the Ivy, and Elemara is currently exploring a possible chocolate collaboration with Green and Black's.

She has been working with the same farm, Sidi Yassine, in Essaouira, Morocco from the outset. "We have a fantastic relationship and are pretty much like family now."

With strong demand for British products and a surge in start-ups in the past year, food and drink has become a very competitive field. How does Elemara keep the wheels of innovation well oiled? "We are in it for the long run so we don't mind a few bumps in the road as long as we are heading in the right direction. In this sense we manage to keep quite cool most of the time.

"It's easy to get caught up trying to sprint your way ahead especially if you focus too much on what other people are doing. We just focus on being true to ourselves, delivering quality with care and really looking after our customers."

In terms of the oil itself, the trees are tested for their health before using the fruit, and the seed is cold pressed immediately in order to retain more nutrients. "The good thing is that fats are in fashion and people are less afraid of them now," says Elemara. "Slowly but surely more home cooks are drizzling good oils on finished dishes instead of loading them up with saturated fat while cooking, though that has its place, too, for certain dishes. People are becoming more and more adventurous with food and are open to venturing further than olive oil."

Despite her preferred dressing for tomatoes, Elemara has helped to put argan oil well and truly on that food map.

Nick Wyke is a Times journalist and food writer responsible for developing a range of creative and interactive content from commissioning food and wine video series, building communities through social media, and organising live cookery hangouts. His work at Times Food across digital platforms has been shortlisted for the Guild of Food Writers New Media Award. He is passionate about colourful seasonal food cooked simply, inspired by Britain's booming food start-up scene and likes his G&T with lots of lime.

The Real Magic of Mushrooms...

How superfoods such as reishi mushrooms and maca can boost your overall health and well-being.

Can you believe these fluffy pancakes are completely free from eggs and flour?

These truffles look just as good as they taste, and you'll be amazed that they're free from dairy and refined sugar!

by Food At Heart

How to Practice Mindfulness...

Mindfulness is a very ancient practice, but in recent years its benefits have been celebrated far and wide. And for g...

This quick and easy recipe involves no cooking and is nutritious and delicious!

A quick and delicious recipe from Hiver Beers!

How to make the perfect por...

We've put together our top tips on how to ensure a tasty bowl of breakfast oats, every time.

Find us on your favourite networks