Fancy 10% off your first order? Sign up to the olive magazine shop newsletter here

Jersey Sea Salt has been harvested from the some of Europe's cleanest waters located between France and the Channel Islands. The sea salt is cultivated by hand and produced naturally using nothing more than the sun, capturing all the beneficial minerals that are normally lost during the refining process with common table salts.

The story of Jersey Sea Salt can be dated back to the Iron Age in Jersey where clay 'salt pots' have been unearthed by archeologists which were used to boil down sea water. More recently salt was produced at Samares Manner, Samares meaning salt marsh in Jersey's native language. Subsequently the marsh was drained in the 18th century to make way for the new manor house. During the 2nd World War Jersey was occupied by German forces and with food being scarce and salt, being a basic human requirement, locals started harvesting their own salt from the sea.

Moving forward 70 years Dave and Matthew, founders of Jersey Sea Salt, were enjoying eating the spoils of a successful fishing trip when it dawned on them that Jersey is famous for its culinary delights; especially sea food, so why was no one producing Jersey Sea Salt? 'France is only 14 miles away and they have been famous for there salt since the Roman times' Dave posed this question to Matt. They spent some time pondering why no one had done it before, racking their brains for the positives and the negatives and the potential pit falls with the idea.

So, how to do it? 'Lots of experiments, from converting an old gas BBQ, to building pans under glass, we've tried it all. Until we came up with our bespoke salt houses, which enabled us to solar evaporate larger quantities of sea water'. Dave stated 'Matt has designed our salt houses that are specific to the climate in Jersey and he claims that we are the only company to do it in this manner however there are others that use a similar process'.

The team is not only Dave and Matt but a network and support from family, friends and the Jersey community has helped them to create a sustainable and environmental friendly company.

Matt and Dave can be found on the weekends paddling their kayaks around the coast of Jersey taking in the spectacular scenery, the wildlife and the general splendor that is the Jersey coast. They have a passion for their home and their artisan product which shines through in every crunch of there unrefined taste of the ocean. 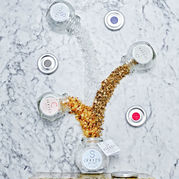